"The US violinist Livia Sohn gives us a committed account of the solo part, and she demonstrates an ease in getting through the notes, even where Britten sets his formidable double-stopping challenges. Sohn's eloquent playing is matched by grittily visceral sounds from the orchestra."

"Sohn's playing...is shot through with angst and urgency."

"Finally, as is often the case in this series, the concert’s yummy meat and potatoes (actually, more like its mouth-watering dessert) came last — in the luscious form of French romantic master Ernest Chausson’s rich and riveting Concerto for Violin, Piano and String Quartet. Do you remember the first time you ever bit into a big, ripe, and juicy peach — you know, the kind where the juice dribbles down your chin while the fruit’s sharp, tangy-sweet flavor hits your tongue like a lightning bolt that reverberates through your whole body with an almost unbearable, brain-freeze intensity. Well, what that unforgettable peach did to your taste buds is something like what this gorgeous music did to my helpless ears.

Chausson was well on his way to becoming one of the top two or three greatest French composers of his day when he met his premature end in a freak bicycle accident (riding one of those old big-wheeled, 1890’s-vintage bikes by the way). But posterity will still honor him forever for, among other works, this magnificent piece, perhaps his best-known chamber work. Our soloists were violinist supreme Livia Sohn, plus piano wonder Inon Barnatan.

As for the music, you had to have been there to really know what I mean; mere words can only convey a tiny part of its overall impact. From the ominous intro onwards, the opening Allegro movement’s musical “juice” flowed so fast and furious that I could hardly lap it all up. Lush, ultra-romantic beauty and soulful ecstasy gushed as if from a fountain. A limpid, flowing Sicilienne (a graceful Italian dance) followed, with occasional contrasting pangs of throbbing lyricism. The stark, yet often densely-toned Grave movement turned out to be a gripping threnody, with its naked grief – complete with sighs and sobs. But all sadness melted away with the headlong Tres animé finale: a mostly playful and bubbly romp that rose to a fever pitch and ended with a real bang, prompting a howling standing O that went on and on."

Beethoven’s “Kreutzer” Sonata for Violin and Piano, a work of extreme technical demands for both instruments, ended the program with a bang. Violinist Livia Sohn played with perfection, in the stormy outer movements as well as in the filigree-laced Andante. Sohn soared in the violin part that at times seems inhuman in its demands. The rapport was evident, and there was a cheering standing ovation at the end. Music-making does not get any better than this.

The Dvorak Concerto was completely satisfying by virtue of violinist Livia Sohn’s wonderful performance. Sohn demonstrated technical brilliance on the very demanding work, and engaging artistry throughout, passionate without theatrics. With pure intonation, she sweetly transitioned from the strident to melodic, delivered elegant phrasing, and electrified the galloping third movement with neat shifts of registers, double octaves, and sparkling high notes, of which there were many.

Two spectacular moments, in particular, made the audience members sigh: the second movement’s horn-violin and flute-violin exchanges that suspended the music in the air; and the huge, big sound Sohn managed to wring out of her violin over a solitary horn in the first movement, a moment that melted into a long hesitation before evaporation into the second movement.

—Sherli Leonard for The Press-Enterprise

Livia Sohn, a former graduate of the Juillard School and pupil of the legendary Felix Galamir, possesses a remarkably lithe and transparent tone of exceptional purity. [Her] virtually blemishless accounts of such ‘finger-breakers’ as Hubay’s Carmen Fantasy and Paganini’s Variations on ‘Di tanti palpiti’ are nothing short of remarkable. Her subtle use of a narrow but never intense vibrato leaves her particularly vulnerable to potential lapses in intonation, yet even when under the most fearsome technical pressure at high velocity, every note rings true with pinpoint accuracy.

The highlight of the recital is Stephen Prutsman’s Fantasy Extract from Der Rosenkavalier, which integrates virtuoso acrobatics and legato radiance with supreme elegance. From the start there is a palpable sense of exhilaration and portamento luxuriance so that one altogether forgets that one is listening to a virtuoso pot-pourri. Kurt Weill’s post-Great War irony breathes the air of a different planet, although Mack the Knife proves no less adaptable to violin pyrotechnics, as witness Sohn’s stunning negotiation of some rapid-fire left-hand pizzicato and sotto voce double-stopped harmonics. [The] recording captures every nuance with commendable detail.

In this new recording, Livia Sohn gives superb, rousing performance of expertly arranged works. Paganini’s delightful arrangement of Rossini’s “Tancredi” demands all of the high-flying wizardry one would imagine: triple-stops, lightening-fast bow work, left-hand pizzicato, and double-stop harmonics (Sohn sounds like a piccolo!), all of which Sohn executes with jaw-dropping ease. In Jeno Hubay’s adaptation of popular tunes from Bizet’s “Carmen”, Sohn is a tour de force. She captures the spirit of the music and convincingly portrays each character, from the pomp of the bullring to the seductiveness of Carmen. Pianist Benjamin Loeb and Sohn are spectacular in their rendition of Golijov’s hauntingly gorgeous evocation of lost love. With her icy, whispering tone in the beginning, which increases to a wide, plaintive vibrato, Sohn is quite convincing. This album is highly recommended for its ambition and high level of expression.

Violinist Livia Sohn is a stunning musician, and she makes the solo violin works the most compelling music on the disc. Every gesture leads inexorably to the next, equal parts logic and surprise. Sohn simply makes everything she plays musically significant, and that’s enough.

… the scariest portion of the evening must have been the Wieniawski—at least for the soloist, who had to negotiate the technical demands of this showpiece. Sohn, who showed up in a sizzling strapless red brocade gown, poured out a tone of both purity and strength in playing that combined passion and refinement. It was that air of refinement, when so many young players feel they have to make their mark by sawing madly away on the fiddle, that distinguished Sohn’s performance as much as her technical finesse and her accuracy of pitch. She made her violin sing in the melodies inspired by “Faust” arias.

[Livia Sohn] gets into each piece and sends it out to the listener with her fine sound and especially the sonorities that she produces with the instrument.

At 25, Sohn has emerged as a splendid violinist with a sensuous tone and a technique that can conquer any difficulty. Above all, she is a serious and thoughtful artist who is more concerned with musicianship than showmanship, and so it was no surprise that her reading of Glazunov’s romantic concerto was always sensitive but never sentimental.

—The Rochester Democrat and Chronicle

Ms. Sohn is a technician to contend with. She is a neat, fastidious player who attends to every detail rather than creating an impression with flashy gestures. It was gratifying to see her prevail over Paganini’s perilous odds. The crowd was delighted, too, awarding her a standing ovation.

The concerto that evening was Bartok’s Violin and Concerto No. 2. Soloist Livia Sohn, substituting at the notice of less than six weeks, brought concentration, technical mastery, and interpretive comprehension to one of the most difficult scores ever penned for her instrument. Sohn’s performance was notable for many things, including her deeply etched realization of the multiple stops that pervade the part, and her sensitivity to the songful beauty of the slow movement.

There’s more to Miklos Rozsa than the lush, souped-up, romantic scores he composed for epic movies of the 1940’s and 50’s. The Violin Concerto of 1953, played with great urgency and drive by Livia Sohn on Friday with the San Antonio Symphony, is a work of serious integrity, fully a part of the high modernist tradition. The solo line is virtuostic almost to the point of heroism, but purposeful and never just showy, and Sohn seemed entirely comfortable with it. She gave the opening Allegro’s agitated, spitfire passages a fine sense of momentum and passion. She brought just the right amount of warmth to the slow movement, which approaches the Hollywood style of love music.

The [Beethoven] violin concerto basked in the warm acoustic surroundings, and was marvelously played by Livia Sohn, a soloist with everything—youth, talent, beauty. It was a memorable performance.

The American violinist Livia Sohn appeared as soloist. She showed how one can win over a public even with such a difficult work as the Khachaturian Violin Concerto. The young virtuoso achieved this thanks to her splendid technique and her ability to develop a piece in bravura style.

The gifted young soloist was Livia Sohn, who played with a heated exuberance and heartfelt musicality. I have also heard Ms. Sohn subsequently in a solo recital and can report that she is, indeed, a bonafide virtuoso and a stylistically sophisticated interpreter.

Through this brilliant, and difficult score [Shostakovich’s violin concerto], Sohn played with incredible concentration and intensity, every note clear as a jeweled bell, every rhythm crisp as a frosty dawn. Her bow changes were seamless, and the vitality and power of every single note from the shortest to the longest, sang with astonishing strength and brilliance.

More than 50 years in age separated violinist Livia Sohn from conductor Sidney Harth, but their mutual artistic response could have been measured in milliseconds. During their performance of Bruch’s Scottish Fantasy with The Louisville Orchestra, it didn’t matter that she is hovering around her 21st birthday and he is closer to his 75th. What did matter was their sumptuous collaboration in an account of persuasive freshness and passion. If this is what’s meant by passing on tradition, then let the decades roll.

An emotionally and technically complex piece [Shostakovich Violin Concerto No. 1], the four-movement work is symphonic in scope, yet Sohn played with masterful command of both its outer shape and inner intricacies.

Livia Sohn has all of the makings of a great soloist. From her opening sequence, Sohn captivated the audience with her aggressive attacks, a showy cadenza in the first movement, soft and sweet phrasing in the middle movement, thrilling high notes in the finale.

Among the highlights on the closing concert was a sweetly rendered performance of the [Barber] Canzonetta by Livia Sohn.

Fabulous virtuoso fiddling was up next, courtesy of Livia, along with the versatile keyboard magician Muzijevic (this time at the piano). They delivered a stunning account of Pablo de Sarasate's Nouvelle Fantaisie Sur Faust, Op. 13. Sarasate, one of the tip-top touring violinists of the Romantic period, followed the then-popular practice among virtuoso soloists of transcribing well-known melodies from the day's most popular operas (this one being Gounod's Faust) into glittering showpieces: sure-fire crowd-pleasers. And Livia proved that they still are, tossing the mostly flashy music off with jaw-dropping technical assurance and breezy abandon, almost as if it were child's play. It earned her a richly deserved standing "O." 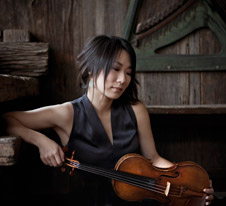